The Aurora Licton Urban Village (ALUV) has been working closely with City of Seattle staff and elected officials, including Councilmember Juarez and her team, to accelerate and enact HALA proposed zoning changes along the Aurora Avenue corridor in advance of the vote for city wide HALA changes sometime in 2018.

Councilmember Juarez will be bringing legislation forward at Monday’s (September 25, 2017) full Council meeting.  If eventually passed, the legislation would put into place interim zoning controls that would encourage development that offers goods and services and building design that are more neighborhood oriented.    Mixed use multifamily residential development with ground floor retail would be encouraged.
The interim zoning controls would be effective for six months, but can be renewed.  The interim zooning controls will build a bridge to guide development proposals along Aurora Avenue between now and when the permanent zoning for Aurora Avenue is adopted. Link to –  ALUV Interim Controls Legislation.

What can you do to support this legislation?

Thank you for your continued support and involvement.
Aurora Licton Urban Village (ALUV) a Neighborhood Alliance

Councilmember Juarez + Director of Homelessness George Scarola both mentioned our letter and said all the points would be taken into consideration. Read letter here.

Site will be low barrier which includes people with pets, partners, excessive possessions and addiction. Public use of drugs in and around the site is not allowed. However, based on resident behavior, what happens behind closed doors will not be monitored. If residents maintain good behavior they will not be questioned about using in their own dwelling.

Site will provide a sharps container. Additionally, if you see any sharps on public property the city will remove within 24 hours per the new pilot program. Sharps Collection Pilot Program www.seattle.gov/util/sharps

Encampment will not include children. VP of new schools informed Director of Homelessness that there were two homeless families currently in the neighborhood. Director confirmed they would be provided housing within the week.

A school assistant superintendent took a ride around the area with George to evaluate potential risks to children going to school – her only concern was access needed to be exclusively on Aurora. This will be the case.

Encampment will have a one  year lease with an option to extend for one year. Per code there has to be one year vacancy before another encampment can be permitted for the site. Encampment will open in March 2017.

Site owned and managed by LIHI who plans to redevelop the site into low income housing but it takes 3-4 years for permitting and construction.

ALUV asked that at least 50% of the residents be from the surrounding neighborhood.  The City would not commit to this number because residents are selected on case-by-case basis. However, they would give priority to people already in the neighborhood.

Tiny homes will be 8’ x 12’ (96 SF) and will be insulated. Units less that 120 SF don’t need to go through an additional permitting process which adds 12+ months to the timeframe which doesn’t help provide housing for those in desperate need now. Site will acquire land use permit as required though.

There is water and power on site.  LIHI is hoping to add heat to the homes as well. Site will try to have plumbed showers and toilets. Showers at Green Lake pool will be available for use as are the showers and laundry facilities provided at the the 3 Urban Rest Stops. https://urbanreststop.org/

Encampment residents will be provided two bus passes a day to go to work or appointments.

Site will be fully fenced with screening and accessed via Aurora Ave only, except for deliveries that would access from Nesbit to avoid blocking traffic on Aurora Avenue.

Trash pick-up will be provided weekly/daily, whatever is necessary.

Site operated by LIHI who will have two staff members on site 24 hours a day. There will also be a site coordinator and two social workers assigned to the Nesbit location. https://lihi.org/

Additional resources will be provided to Aurora Commons.

Community Advisory Committee: up to 7 members of the community. Committee will help to ensure that the encampment runs successfully and respects the surrounding neighborhood. Group is expected to meet monthly to address any concerns and to assess the success of the encampment.

SPD said they would allocate existing patrols to areas as needed. They did not expect any issues with an uptick in crime and had no major incidents at the Ballard encampment.

The Parks Department is in charge of public parks and they are the ones to go to for people camping in parks, cleanup that is needed, and general safety issues in the park.

Last month the City announced a plan to establish three additional sanctioned encampments to serve homeless people. That plan calls for creating a low-barrier encampment at 8620 Nesbit Ave North that would have 50 tiny homes serving between 60-70 people. Sanctioned encampments are a temporary measure to provide people living without shelter a safer alternative place to live while caseworkers help them secure long-term stable housing.  Here is the FAQ sheet distributed previously.

The City hosted a public meeting on December 14th to describe the plan and to listen to community concerns. The City is hosting a second public meeting on Tuesday, February 7th to provide further information and to address concerns that have been raised.  We encourage you to attend. 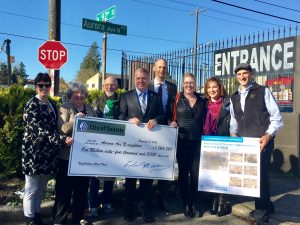 This has been a very busy year for ALUV and 2017 is shaping up to be even busier. Be sure to follow us on Facebook and join our email list on our website for updates.   Join us as we meet the second Thursday of every month at Lantern Brewing (938 N. 95th Street).   Please stop by, say hello and learn more about us.

April – Submitted for Neighborhood Parks and Street Fund (NPSF) Grant.   The top 3 applications moved on to next step, we came in fourth  out of 15 applications.

May – Lead neighborhood organization of Mayors “Find It/Fix It” Walk.

May – Submitted for a Neighborhood Street Fund Grant for pedestrian and improvements to Aurora Avenue.

June – On the one year anniversary of our formation we obtained voting membership status on the NW District Council.

June – Our second year hosting a booth at the Celebrate North Seattle event at the Oak Tree Plaza.

November –  Received a check from Mayor Murray for our joint Neighborhood Street Fund (NSF) Grant of $1 million+ for improvements on Aurora Ave, including new crosswalks, art, and a potential pedestrian signal at N. 92nd Street for students crossing Aurora to get to the new schools at 90th.

Throughout the year we have:

ALUV is excited to announce our first annual Halloween event at Lantern Brewing! Come join your neighbors for some fun and games Saturday, October 29th from 2-4pm. 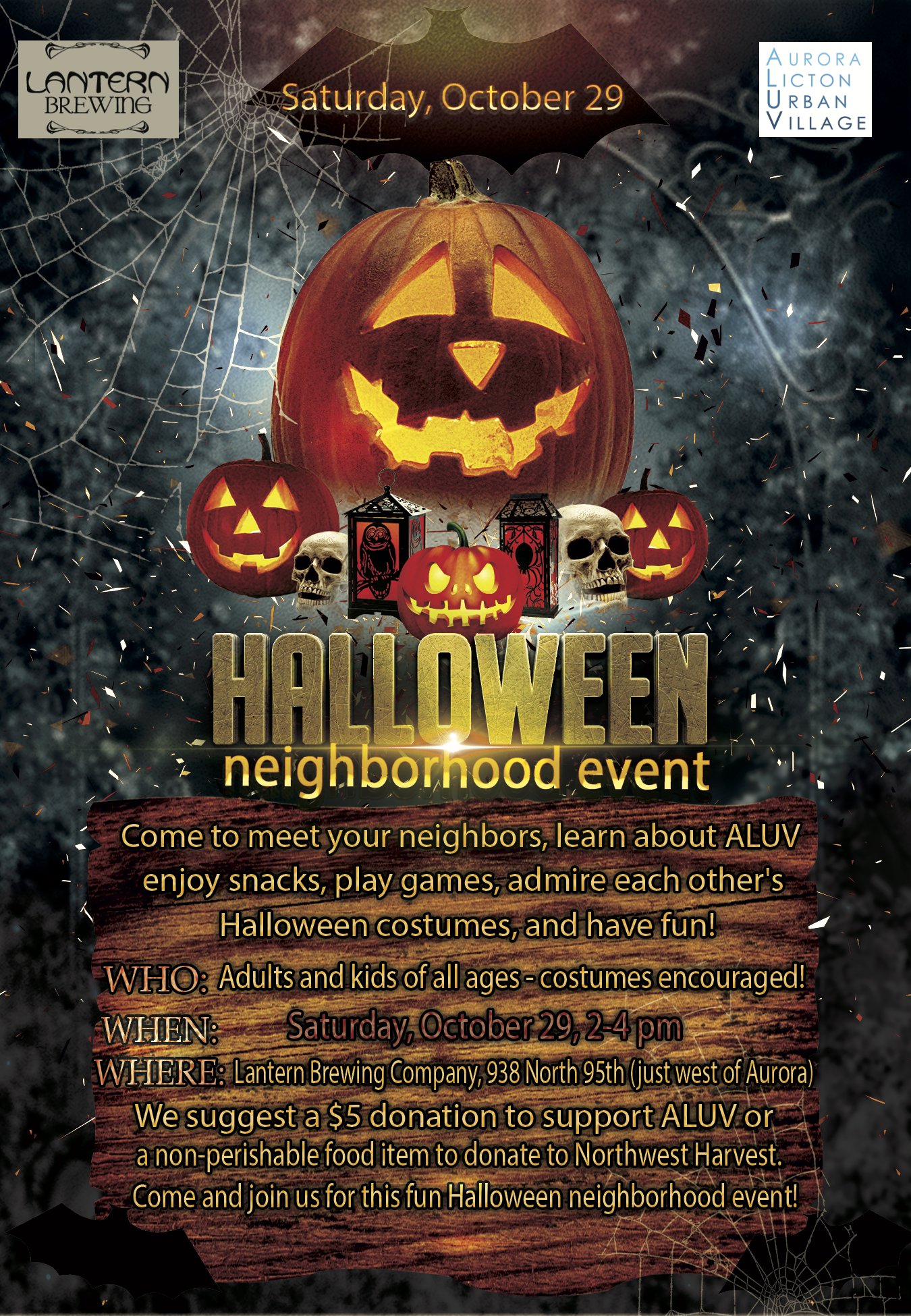